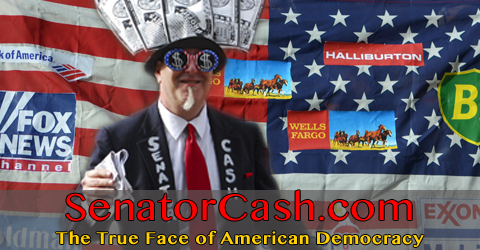 Senator Cash is a street theatre buffoon parody politician with a crown of money and corporate logo’s covering his clothes, originally created for the Occupy San Diego protests.

The themes revolve around the ways in which our government is for sale to the highest bidder and this reiterates a value system that privledges money and materialism over compassion and cooperation.

The hook for this performance is that half the nightly proceeds will be given away to the audience as prizes. It has the raucous atmosphere of a gameshow circus, maybe the trading floor at the N.Y Stock Exchange. Senator Cash is the host and the structure is built on crazy opportunities for people to win money in fun but satirical ways, while disseminating facts and information and critique. The performance might include set pieces by Senator Cash. Maybe a character inspired by the San Francisco Mime Troupe character Factwino. Unexpected surprising events. The climax may be dropping 100 $1 bills from the ceiling letting people scramble for the. Possibly offer the opportunity for the winners to donate their prize money to a charity or cause.