Public Moves Ensemble Theatre will perform the American premiere production of “Alpenstock” by French playwright Rémi de Vos and translated by Gwynneth Dowling, at the Palomar Unitarian Universalist Fellowship on November 22 and 23 at 7:00 P.M. Proceeds from these performances will benefit the fellowship’s Peace Team.

“Alpenstock” is a hilarious provocation that boldly challenges us to confront a variety of national obsessions. It revolves around Fritz and Grete, who live an apparently idyllic, conservative life . . . until Grete buys “foreign” detergent at The International Market to clean their chalet. Suddenly a suave foreigner penetrates their defenses and disrupts their predictable world, leading to seduction, slapstick and genocide.

Recently performed at the San Diego Fringe Festival, “Alpenstock” received a Critic’s Pick. The Union Tribune called it “A zany absurdist romp . . . a bawdy production that doesn’t take itself too seriously, with lots of laughs . . . some political ideas . . . a broad comic free-for-all.”

The circus of “Alpenstock” re-enacts the phenomena of nationalism, racism, sexism, immigration and violence. Although written in France and set within the context of Europe, ”Alpenstock” transcends its original context and speaks volumes to these phenomena as they exist in our own culture and community.

Marcos Martinez first saw a production of “Alpenstock” while teaching the Suzuki Method of Actor Training in Athens, Greece. As he describes, “It was a French play translated into Greek, and even though I didn’t understand a word, the action was hilarious and very clear. I couldn’t wait to see it again the next night.”

Inspired by the Greek production, Martinez commissioned Gwynneth Dowling to translate the play from the original French into English. He shared the translation with director Michael Mufson. “When I read the script I immediately grasped its potential to be a hysterical yet profound provocation to recognize some disturbing truths about our world while laughing our butts off.”

After Mufson and Martinez invited John Polak to play Fritz, they decided to create an umbrella organization to foster new theatre projects that engage communities, subjects, and forms that are ignored by the mainstream, commercially-oriented theatre. All three also share a background and passion for physical theatre. They set about to conceive a name and mission that would encompass these intentions, and arrived at Public Moves Ensemble

Theatre with the mission, “To create theatre for the public good.”

“This immediately raised the question of what is the public good,” said Mufson. “Rather than offering some set answer, we are interested in theatre that provokes this question and stimulates discussion of what is in the public good. According to Christina Wenning, who plays Grete, “We are convinced that, in our current culture of apathy, partisan antipathy, technological disconnection, and pervasive violence, this is the most important question we can ask.”

The Palomar Unitarian Universalist Fellowship is located at 1600 Buena Vista Drive in Vista. Tickets are $10.00. For more information visit http://www.publicmoves.org 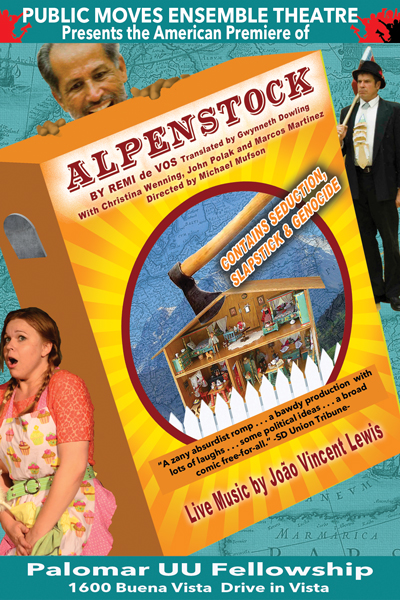